The lights went dim, slowly over a decade or so, until it all went dark. I tell myself all these years were preparation for the storm that was in me all along, but the practice of the dim was not enough to teach me the difference between a little rain and a complete stop to the universe. It’s not the way the power went out. I’m not afraid of the dark and thunder never scared me. It’s more than that. There’s no way for me to describe it other than to say, the windows fog over during storms sometimes and maybe you don’t have a clear view looking out until the storm passes…. until the storm passes. That’s not the kind of storm that hit me. I wish that was the storm I was standing under, covered over, I would run to the center, kiss the eye of it straight on the mouth with no fear of catching lightning in my veins. I would brave that storm, arms out, begging god to strike me with a light like that; in fact I would scream it as a dare. Some days I would give anything to only know a storm like that. But my storm’s not like that, it’s like this: deep roar from my inside core, calling my name like the cry from a headstone demanding to be filled, and I’m as empty as the hole dug six feet deep, but deeper. Lungs twisting like hands folded with a prayer for wind that goes unanswered and I cannot breathe. Choking on the lump in my throat like butterflies racing for the nearest exit that just closed up to promise a slow suffocation during the mid-flight crash and I am crashing. Tornado spinning behind my eyes to make sure I’m paying attention to the sky dive my heart takes lessons in and the power lines fall into my chest heavy from the thunder in my pulse, striking through my veins like lightning that lost its light in the dark. This is a black out, carving any light from the inside to steal all the shine that ever was and smearing it filthy as it writes my name in red, spits over it with black, plants it in my bones so the dark keeps growing, smears it across my face until I taste all that I’m not. Legs unsteady like an earthquake beneath my feet, ungrounded on a surface that never stops falling as I cave in on myself from a sky that fell on my shoulders, and I carry the weight of the world, bent over, curled fetal, wishing on the stars for one last chance at hope. Rain behind my eyes trying to be a sob that never stops, flooded over with thoughts pouring like hail hitting me in the face and I cannot dodge it. This storm… it doesn’t have a shelter. There is no waiting for the storm to pass because it never does. This storm is on the inside looking out and the sky in my eyes is never clear. There is always a storm brewing just beneath my skin, waiting with a promise to destroy me. I never check the weather. My heartbeat alerts me when the storm rolls through my veins and I brace myself just before the sky splits itself from my bones; the storm is home. 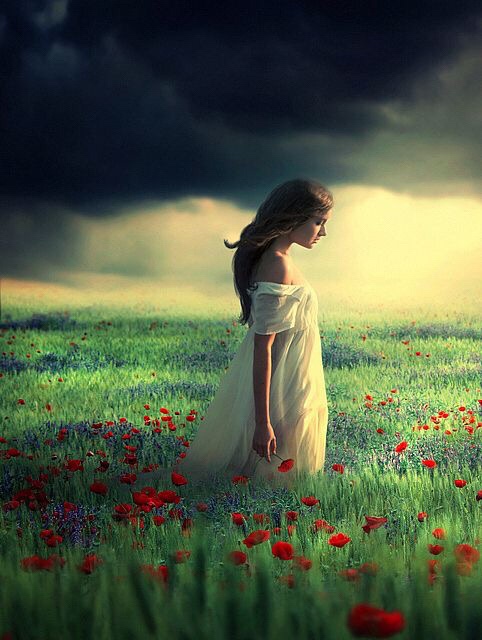 3 thoughts on “The Storm is Home”